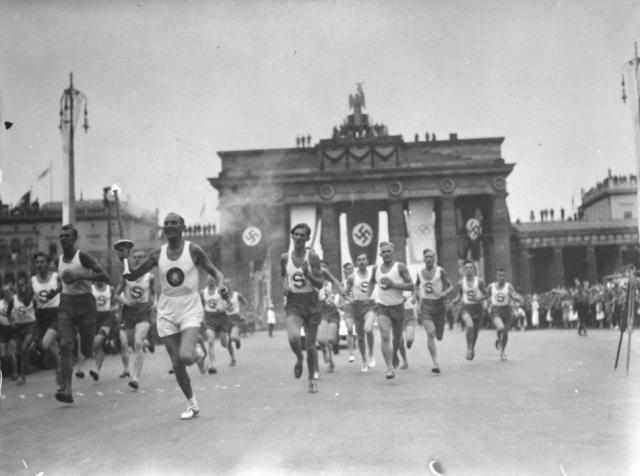 Summer Olympic Games (August 1 - 16, 1936) In 1931, the International Olympics Committee awarded the hosting of the 1936 Summer Olympic Games to Berlin. After World War I ended in 1918, the conditions of the Versailles Treaty isolated Germany. Hosting the Olympic Games was an important marker for the nation. Two years later, in 1933, Adolf Hitler and the Nazi party rose to power in Germany and turned it into a single-party dictatorship.

As with all other aspects of life in Germany, the Nazis sought to control sports. They utilized athletic imagery to promote their racial ideology, emphasizing the physical health and prowess of the German race. An "Aryans" only policy was applied to all German athletic organizations in April 1933. Anyone with Jewish or Roma parents could not be members of clubs or participate in public sports.

The Olympic Games stood as the ultimate opportunity for the Nazi regime to show the world Germany's new strength while masking their persecution of Jews and Roma. People in the United States, Great Britain, France, Sweden, Czechoslovakia, and the Netherlands called for the first boycott in modern history of the Olympic Games, citing the abuse of human rights in Nazi Germany. The boycotts failed to change the location or pull participation in the Games.

Diplomatic pressure, however, did ensure the Jewish German fencer Helene Mayer was allowed to represent Germany during the Games. She was the only Jewish athlete to do so.

The Nazis used propaganda leading up to and throughout the duration of the Games to promote their racial ideals, drawing connections between modern German athletes and the Olympic athletes of Ancient Greece. The German film maker Leni Riefenstahl was commissioned by the Nazis to produce a documentary about the Games; Olympia was released internationally in 1938 and received controversial responses.

The Games were opened in August 1 with an address from Adolf Hitler and music directed by the famous composer Richard Strauss. Athletes from 49 teams representing countries around the world competed until the Games closed on August 16. The largest team, consisting of 348 athletes, represented Germany. The second largest team, with 312 athletes (18 of which were African Americans), represented the U.S. The German team received the highest total of medals.

Two days after the Games concluded, the head of the Olympic village, Captain Wolfgang Fuerstner, committed suicide after being dismissed from military service due to his Jewish parentage. According to Nazi racial ideology, Jews were defined according lineage and not by religious belief or practice. Hitler's plans for German expansion forged on and World War II began three years later in 1939 with the Nazi German invasion of Poland.