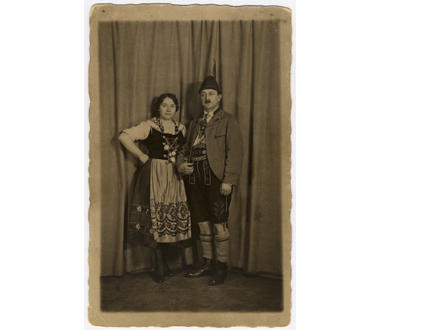 Max Hanauer was a Jewish German. He owned a clothing factory in Berlin. In 1903, he came to the United States. In 1906, he returned to Germany after surviving the San Francisco earthquake. During World War I, he served in the Germany Army.

In 1915, Max married a Christian woman, Frieda Teske. The couple had two children, Ilse (born in 1916) and Hans (born in 1918). During the Holocaust, Max and Frieda were hidden outside Berlin by Lotte Mader, an employee of Max’s clothing factory. Frieda hid jewelry and over 200 family photos by sewing them into her clothing. In the late 1930s, as the Nazis and their collaborators began "Aryanizing" Jewish-owned businesses in Germany, Max was forced to sell or liquidate his company. The  factory was destroyed by bombing during the war.

Ilse survived the war living with her best friend, Tutta, and her husband. Ilse used Tutta’s ID card to avoid arrest by the Nazis and their collaborators for being Jewish. After the war, she came to the United States where she died in 2002 at the age of 86.

Hans married Ursula Rosenfeld, who was also the child of a Jewish father and Christian mother. In 1940, the couple welcomed their first child, Uri. The following year, Hans was arrested for his anti-Nazi beliefs and interned at a labor camp controlled by the Gestapo. From there he was deported to the Auschwitz camp complex in March 1943. He was murdered there in the gas chambers two days after arriving. He was 24 years-old.

Ursula and Uri were protected by Ursula’s Christian mother, Emma Tscharntke-Rosenfeld. Ursula’s father, Jonas, was arrested and sent to a facility with other Jewish husbands of Christian women. On March 8, 1943, he was released after a successful demonstration by the wives.

Emma continued to protect her family until her death on August 16, 1944. Five days later, Jonas, Ursula, and Uri were arrested. They were sent to the Theresienstadt camp-ghetto in Austria two weeks later. They remained there until they were liberated in June 1945. After the war, they returned to Berlin then immigrated to the United States the following summer.