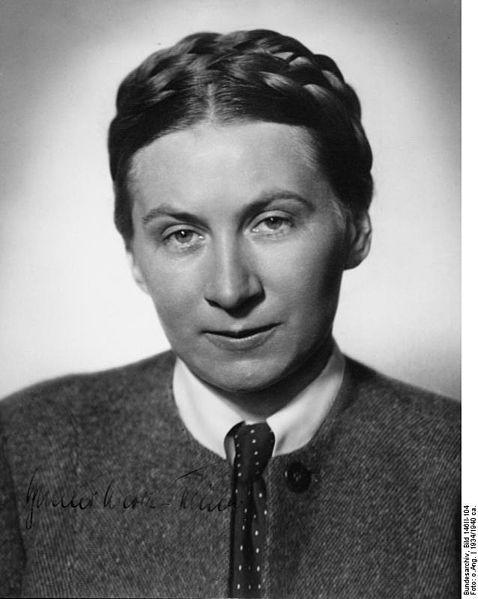 Head of National Socialist Women's League (1902 - 1999) Gertrud Scholtz-Klink was head of all Nazi women's organizations. She was a long-time member of the Nazi party, joining in 1929. As a mother of six children, she was the perfect model of the Nazi's female ideal. With her Aryan features and dutiful adherence to the Nazi dress code of dirndl or uniform, she was chosen as "First Lady of the Reich." She fulfilled every requirement of Nazi "First Lady" but bore nicknames such as "Reich Mother-in-Chief" or the derogatory "Reich Thundering Goat."

After World War II ended, Gertrud escaped from a Soviet prisoners-of-war camp. With the help of Princess Pauline of Württemberg, Gertrud went into hiding in a German village. In 1948, she was discovered and arrested. A French military court tried and charged her with forging documents. In 1953, she was released from prison and settled in Bebenhausen where she remained until her death in 1999 at the age of 97.