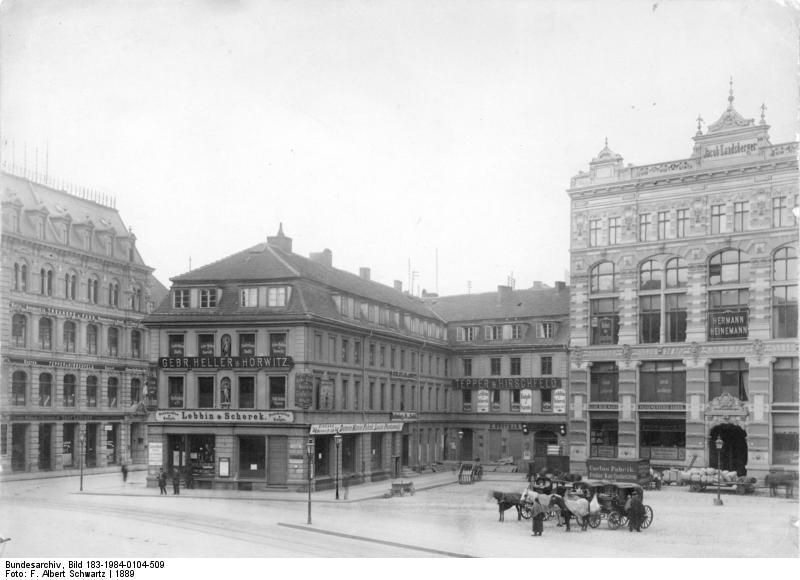 Hausvogteiplatz is a square in the Mitte district of Berlin. Beginning in the mid-to-late 19th century, it became the center of Berlin's clothing industry. Specifically, it was the birthplace of German Konfektion. The ready-to-wear industry in Germany adapted haute couture designs from Paris by reproducing them on a mass scale in standard sizes through a system of subcontractors and home-seamstresses.

In 1860, Hausvogteiplatz was home to approximately 20 clothing manufacturers. By 1870, that number doubled. Berlin Konfektion firms were exporting clothes to the Netherlands, United Kingdom, Sweden, Switzerland, and the United States. The Konfektion industry achieved much success in the late 19th cenutury and early 20th century. It provided a range of well-made, inexpensive clothes to wide clientele through Germany and Western Europe. Before the rise of Konfektion, only wealthy customers could afford to follow fashion trends by commissioning custom tailored garments.

Many of the Konfektion and textile businesses were owned by Jewish Germans. This was in part the result of economic policies in Germany that restrict Jews from many professions, except trade and retail. Among some of the first and most successful German Jews in the industry were Hermann Gerson, Valentin Manheimer, and Rudolph Hertzog. Approximately 50% of Konfektion businesses were owned by Jewish Germans.

After the Nazis' rise to power in 1933, Jewish business owners were forced to sell their companies and property for extremely low costs or no payment at all. By the end of 1939, the German fashion industry had been completely "Aryanized" - free from Jews.

Parts of Hausvogteiplatz were damaged during Allied bombing raids in 1944-45.

In 2000, a memorial was erected for the Jewish German workers and business owners in the fashion industry who were persecuted by the Nazis and their collaborators during the Holocaust.