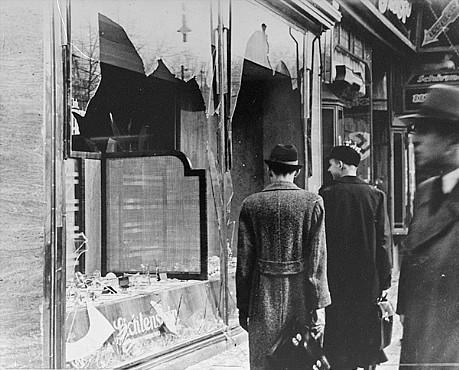 Kristallnacht - Night of Broken Glass - refers to the violent pogrom targeting Jews in Germany, annexed Austria, and parts of occupied Czechoslovakia on the night of November 9-10, 1938.

Kristallnacht marked a crucial turning point in the Nazis' antisemitic policy. Their measures became more radical and violent, culminating in the attempt to annihilate European Jews.

The name Kristallnacht comes from the broken glass that lay as remnants of the pogrom in which Jewish homes, businesses, synagogues  were destroyed and looted. The violence was started by Nazi officials, members of the SA (Storm Troopers) and Hitler Youth. Nearly 267 synagogues  and an estimated 7,500 Jewish-owned commercial properties were destroyed by rioters. Local police and firefighters were specifically ordered not to intervene unless non-Jewish property was threatened. This all occurred in full view of the public.

Up to 30,000 Jewish men were arrested by SS and Gestapo unites, following orders from SS Chief Reinhard Heydrich. Most of the men were sent to concentration camps in Dachau, Buchenwald, and Sachsenhausen.

After Kristallnacht, the German government pronounced that the Jews themselves were to blame for the pogrom. The Jewish German community, not the German insurance companies, was collectively fined one billion ($400 million in 1938) for the damage. The cost of all repairs was the personal responsibility of the Jewish owners.