Traveling exhibit: "Witness to the Holocaust"

William Alexander Scott III, whose father founded one of the first black-owned daily newspaper in the 20th century – The Atlanta Daily World, grew up in Atlanta, attended Morehouse College, and later became the editor of the newspaper. He was also a tireless civil rights activist and WWII photojournalist. In addition to telling Scott's witness testimony, the exhibit also includes panels drawing parallel between the Jim Crow Laws and the Nuremberg Race Laws of 1935-1945 implemented in Germany and Nazi-controlled areas of Europe. 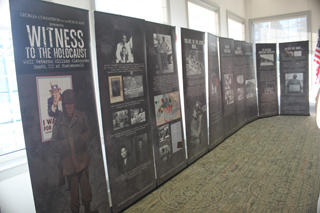 The exhibit consists of 10 free-standing panels measuring 7’ by 2’6” each that must be arranged in chronological order according to the number on the reverse side of each panel.