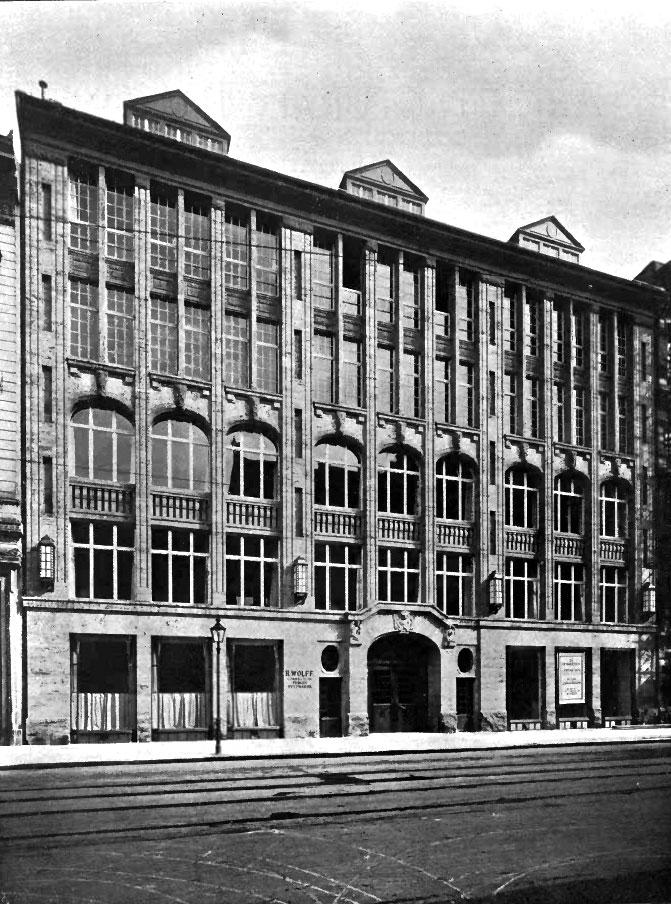 The H. Wolff fur company was founded by Heimann Wolff in 1850. The company went on to become one of the most successful international fur businesses in Germany.

During the political and economic upheaval of the 1920s, fur trade and sales declined as the financial situation of its clientele changed on account of unemployment and hyperinflation. The building in which the H. Wolff fur company was headquartered (Krausenstrasse 17/18, located 1/2 a mile east of the Wertheim department store) in Berlin was increasingly divided up to offer commercial rental space. The building was home to numerous Jewish German garment manufacturers such as Hermanns & Froitzheim, Cohen & Kempe, Anders & Basch, and Dick & Goldstein. The building stood in close proximity to Hausvogteiplatz, the birthplace of Berlin Konfektion.

After the Nazis came to power in Germany, life for Jewish Germans changed dramatically. In 1937, the Victoria Insurance Company foreclosed on the mortgage and transferred ownership of the H. Wolff fur company's building at Krausenstrasse 17/18 to the Deutsche Reichsbahn (German National Railway), the very same railways that later transported millions of Jews to Nazi camps. During World War II (1939-1945), the Victoria, chaired by a lawyer with connections to the Nazi party, was part of a consortium insuring SS-owned forced labor workshops in the Auschwitz camp complex and other concentration camps.

Most of the Wolff family escaped Nazi Germany and began new lives in Palestine which was then under British administration. The eldest great-grandchild of the H. Wolff company's founder, Annemarie Wolff, eventually came to the United Kingdom where she studied nursing and mental health. She married Dan Gold, the son of Jewish immigrants from Eastern Europe, and their family grew to include two children.

In 1961, the Berlin Wall was constructed and the Wolff building lay in the Soviet sector, two blocks from Checkpoint Charlie, one of the best-known crossing points in the Berlin Wall between East and West Berlin. For almost three decades the building lay out of legal reach but Annemarie's mother, Nellie, never forgot her family's life in Berlin. Annemarie's daughter, Dina, grew up hearing stories from Nellie about the H. Wolff fur company and its grand building at Krausenstrasse 17/18 - which she dreamt of one day reclaiming.

After the fall of the Berlin Wall in 1989, Dina Gold, returned to Germany to locate and reclaim her family's building. Thus began a years-long, complex legal battle for restitution which Dina recounts in her book Stolen Legacy: Nazi Theft and the Quest for Justice at Krausenstrasse 17/18, Berlin.