October 2019 marks 80 years since the inception of the first Nazi mass murder program, codenamed T-4. It began two years before the genocide of 6 million European Jews began. The Holocaust took place because individuals, groups and nations made decisions to act, or not to act. How did educated medical professionals become complicit in supporting, enabling and implementing Nazi racial ideology?

From 1933 to 1945, Nazi Germany, led by Adolf Hitler, advocated an ideology of “blood and soil” – “blood” referring to the ideal of an Aryan master race, and “soil” to the conquest of Europe. Driven by antisemitism and racism, the Nazis attempted to murder all of Europe’s Jews and cleanse German society of those they believed threatened the health of the nation.

Eugenics sought to eliminate those considered “unfit,” “life unworthy of life.” In 1933, the Nazi dictatorship enacted the Law for the Prevention of Genetically Diseased Offspring. The Nazis, with the collaboration of scientists, researchers, statisticians, teachers, doctor and nurses identified those who were “unfit” and carried out forced sterilizations.

In 1938, Nazi Propaganda Minister Joseph Goebbels stated: Our starting point is not the individual and we do not subscribe to the view that one should feed the hungry, give drink to the thirsty or clothe the naked…  Our objectives are entirely different: We must have a healthy people in order to prevail in the world.

World War II began on September 1, 1939 and provided cover for new Nazi programs, for killing “life unworthy of life”, those regarded as burdens on national resources. The Nazis justified murder in the name of euthanasia, mercy death, and enlisted hundreds of asylum directors, pediatricians, psychiatrists, family doctors and nurses. The first victims were German children. From 1939 to 1945, more than 5,000 infants and children were killed in special state hospitals and clinics.

In October 1939, Hitler signed a document authorizing “mercy deaths” for patients deemed incurable. The T-4 program expanded to include adults. From January 1940 to August 1941, more than 70,000 men and women were murdered in gas chambers. Many of the medical professionals who implemented these programs were sent on to Auschwitz-Birkenau to run their killing program.

By the end of World War II in 1945, approximately 200,000 people were murdered in the T-4 program. Few of the medical experts complicit in Nazi genocide were ever brought to account. Most of the doctors who participated in Nazi genocide continued their professional careers after the Holocaust. 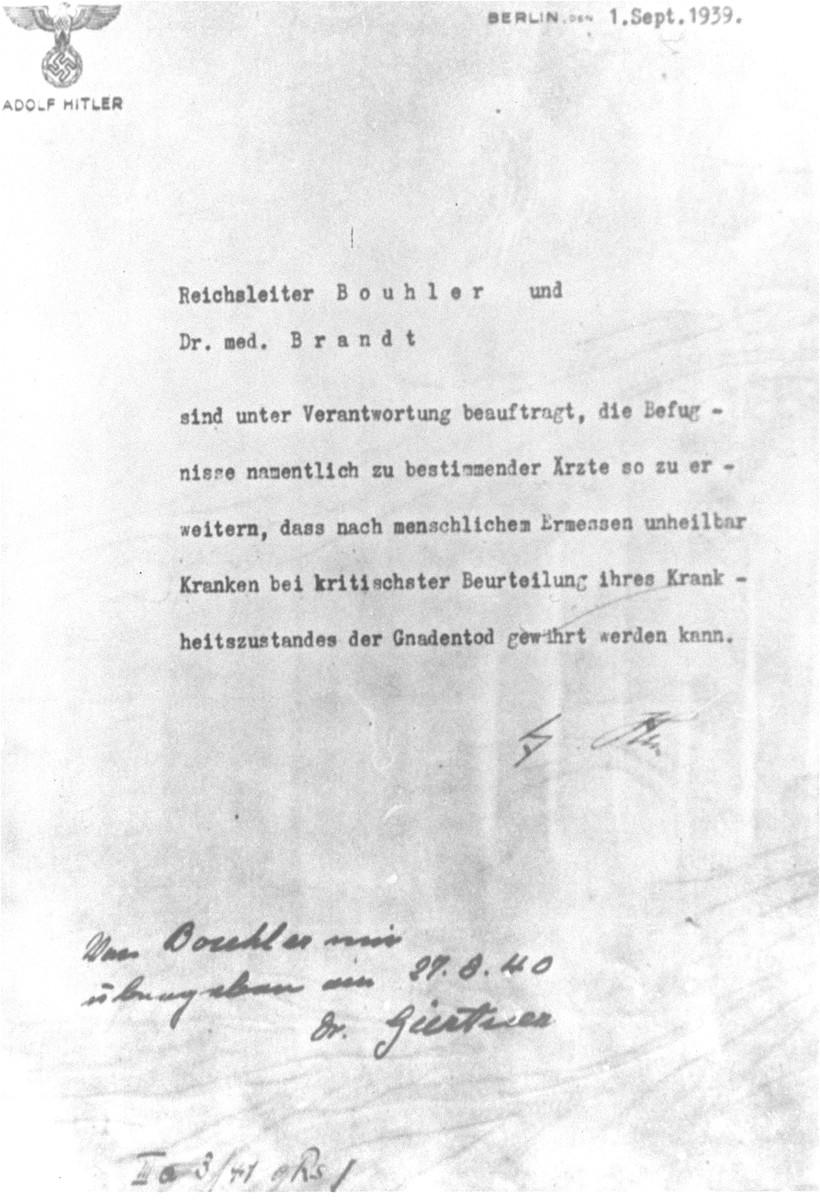 Translation: Reichsleiter [Philipp] Bouhler and Dr. med. [Karl] Brandt are charged with responsibility to broaden the authority of certain doctors to the extent that [persons] suffering from illnesses judged to be incurable may, after a humane, most careful assessment of their condition, be granted a mercy death. [Signed] Adolf Hitler.
News & Events