The arrest of occupants of the Secret Annex 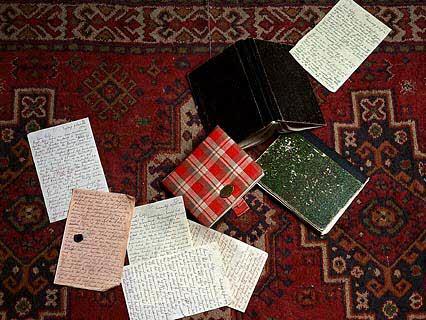 This fall marks the anniversary of the arrest, deportation, and imprisonment of the occupants of the Secret Annex.

"These events are of particular importance as it moves the Frank family out of hiding and the protection of their rescuers, into the maelstrom of the terrors of the Holocaust. It is also poignant in that in just a few months the liberation of the camps will begin. Neither Anne nor her sister will remain alive long enough to be freed," comments Sally N. Levine, Executive Director of Georgia Commission on the Holocaust.

Anne writes what will become the last entry in her diary, signing it “Yours, Anne M. Frank.”

It is a sunny day in Amsterdam.

There are eight people hiding in an apartment tucked away from view of the street behind a warehouse and business office in Amsterdam: Otto Frank, his wife Edith, his daughters Margot and Anne; Hermann van Pels, his wife Auguste and his son Peter; Fitz Pfeffer. They have been hiding in the apartment- the Secret Annex - for two years. Four of Otto's employees have been helping them by providing food, clothing, news, and occasionaly some company. In doing so, Miep Gies, Johannes Kleiman, Victor Kugler, and Bep Voskuiji are risking their lives.

Julius Deetman, the officer in charge of the German Security Service in Amsterdam, dispatches SS-Oberscharführer Karl Silberbauer to 263 Prinsengracht. He is accompanied by two or three Dutch policemen. They arrive around 10:30am.

They enter the building through the ground floor warehouse where the warehouseman, Van Maaren, directs them towards the stairs that lead up to the offices.

They enter the office where the four employees helping hide the occupants of the annex are working. Silberbauer, pistol in hand, orders Victor Kugler to show them where the Jews are hiding.

They enter the annex through the bookcase door. This is what the occupants of the annex have feared most. They have been discovered. Before they are rounded up and escorted out of hiding, they are ordered to hand over all their valuables. In the process, Silberbauer opens Otto's briefcase and dumps the contents onto the floor. Anne's diary and pages of her writing fall out and scatter at his feet.

When the raid is complete, the eight occupants, plus Kugler and Jo Kleiman are arrested. They are taken to a German controlled prison where they are kept for interrogation for four days.

Sometime later, Miep Gies and Bep Voskuijl return to the annex and collect Anne's diary. Miep wants to keep it safe because she knows Anne will want it back when she returns. She does not know that only Otto will survive.

The occupants of the Secret Annex are taken by train from Amsterdam Central Station to the Westerbork transit camp. They remain there for nearly a month with thousands of other prisoners until they are put on a transport to Auschwitz.

Westerbork is located in the northeastern region of the Netherlands. It was established by the Dutch government in October 1939 for the purpose of interning illegal Jewish refugees, most of whom are from Germany. The camp was enlarged in 1942 and began serving as a transit camp - interning Jews before being deported to extermination camps futher east. Most of the Jews who pass through Westerbork are killed at extermination camps.

Transports leave from Westerbork every Tuesday until September 3, 1944. The occupants of the Secret Annex will be among 1, 019 other prisoners on one of the last transports.

Life at Westerbork is best described by survivors in interviews recorded by the United States Holocaust Memorial Museum. A collection of photographs of the camp also provide glimpses of camp-life and the deportation process.