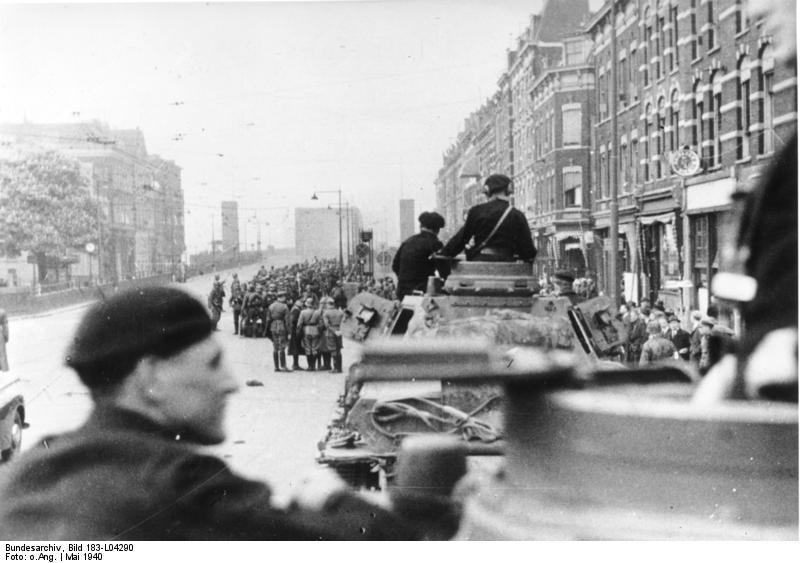 Nazi Germany launches its western offensive with the invasion of Belgium, France, and the Netherlands. Allied commanders initially anticipated that German forces would attack as they had in World War I - by way of central Belgium. British and French forces were placed near the Franco-Belgiun border. Instead, the Germans attack through the Ardennes Forest in southeastern Belgium and northern Luxembourg.

In an effort to hinder the German advance over land, Dutch forces destroy bridges and other river crossings. German soldiers meet a Dutch defensive line in the Grebbeberg and a battle ensues for 3 days.

The Dutch army is overpowered and the Grebbeberg line falls.

A warship transports Queen Wilhelmina of the Netherlands to England where the British king welcomes her that same evening. Although she does not want to abandon her county, she submits to her council of ministers' urge to flee to safety.

The Germans issue a message to the Dutch commander in Rotterdam: surrender by afternoon or German forces will attack with bomber aircraft.

Before the deadline has passed, the Germans begin bombing. Much of the city center is destroyed. Between 600-900 people are killed and almost 80,000 are left homeless.

In retaliation for the bombing of Rotterdam, the British air force attacks Ruhr, a major industrial city in Germany.

German troops enter Amsterdam near the Merwedeplein where the Franks live. The Germans are welcomed by Dutch Nazis who salute them in the streets. (The Dutch Nazi Party was founded in 1931 by Anton Mussert and Cornelis van Geelkerken. It was modeled on Italian fascism and German national socialism but its basic platform was not anti-semitic until 1936. Party membership increased approximately 71% between 1931 and 1940.)

Amsterdam is the largest city in the Netherlands. Jews comprise less than 10% of the city's population. The Frank family has been living there since 1934 after leaving their home in Germany. They were not the only Jewish Germans to move to the Netherlands after Hitler's rise to power.

With control of the Dutch capitol of Amsterdam, the Germans establish a civilian administration dominated by the SS (the elite guard of the Nazi state). For the time being, the new regime allows Jews to go about their business as usual. By October 1940, life for Jews living in the Netherlands will change dramatically.

German Invasion of Western Europe, May 1940

Anti-Jewish Measures in the Netherlands