World War II has ended. It has been nine months since the eight inhabitants hiding at the Secret Annex were discovered and arrested. Anne’s father, Otto Frank, is the only survivor. 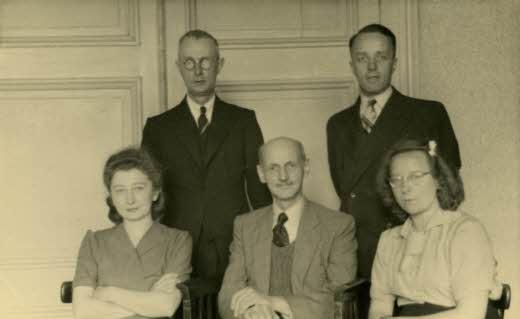 Otto’s business in Amsterdam has been run by his most trusted employees. Despite being sent to camps after being arrested for helping hide the Frank family, Johannes Kleiman and Victor Kugler have survived and returned to work in Amsterdam. Miep Gies has been holding on to Anne’s diary for safe keeping. They are all waiting for news of the people in hiding.

Miep’s husband, Jan, is working at a center to assist survivors returning to Amsterdam. He asks for news of the Frank family and learns that Otto is on his way back. Jan goes home to tell his wife and the very moment he shares the good news they see Otto pass the window. He rings the bell and when Miep answers, the first thing she asks is about his wife, Edith. “She is not coming back,” he tells her, “but I have hope for the children.”

We looked at each other. There were no words. He was thin, but he’d always been thin. He carried a little bundle. My eyes swam. My heart melted. Suddenly, I was afraid to know more. I didn’t want to know what had happened. I knew I would not ask—Miep Gies

At first Otto stays with Miep and Jan. Otto knows his wife has died, but he does not know that his daughters have died too. He begins searching through records and writes letters inquiring of his daughters’ whereabouts. Miep continues to keep the diary in the drawer of her desk. She is waiting to give it back to Anne herself, something she has been looking forward to very much. He even places an advertisement in the newspaper asking for news about his daughters.

Anne's sixteenth birthday comes and goes without any news of her whereabouts.

Now that they know the girls will not be returning, Miep opens her desk drawer and gives Anne’s diary to Otto. “Here is your daughter Anne’s legacy to you,” she says.

After learning that his daughters did not survive, Otto sends a postcard with the news to his family in Switzerland.

Again and again small groups of survivors returned from different concentration camps and I tried to hear something from them about Margot and Anne. I found two sisters who had been with Margot and Anne in Bergen-Belsen. They told me about the final sufferings and the death of my children.

Otto has not yet read Anne's diary. A month will pass before he opens it and begins to read it slowly, only a few pages each day.

Otto Frank places an advertisements in the newspaper

After the betrayal and after the war

Otto Frank searches for his daughters