Eighty one years ago, on November 9–10, 1938, Jews in Nazi Germany and its occupied territory were subjected to ruthless destruction and incarceration in what became known as Kristallnacht, the Night of Broken Glass. On that night, shattered glass littered the streets and Jewish-owned businesses, synagogues, and homes were vandalized and destroyed. Thirty thousand Jewish men were rounded up and taken to concentration camps.

The violence of Kristallnacht was a dramatic escalation of Nazi anti-Jewish policy, which deprived Jews of their citizenship, their property and businesses and their rights to participate in German economic and cultural life. This was the first time Nazi officials unleashed widespread assaults and devastation inflicted on the Jewish community. After Kristallnacht, the Jewish community was forced to pay one billion Reichmarks to compensate Germany for the property damage. New anti-Jewish laws and decrees soon followed. It became clear to many Jews under Nazi occupation, that it was imperative that they leave.

Although this unprecedented violence against the Germany’s Jews prompted outrage in the United States and around the world, American public opinion reflected the tough economic times, restrictive immigration policy and antisemitism. See the poll below: 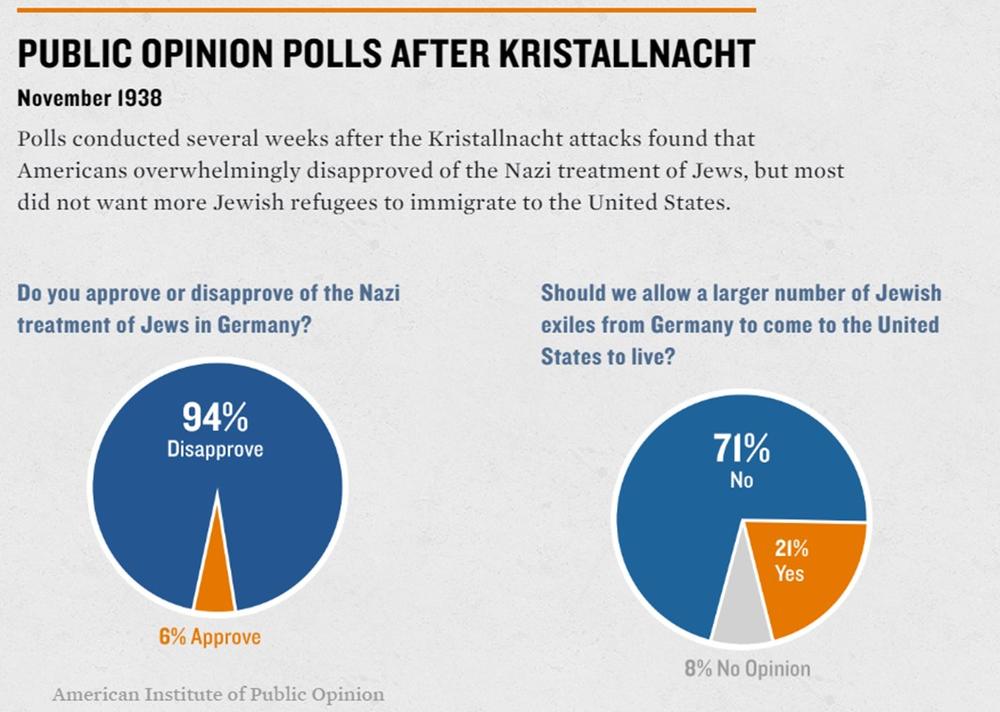 Why Didn’t the Jews Just Leave?

Requirements for immigration were onerous. (Adapted from the US Holocaust Memorial Museum)

To leave the German Reich, immigrants needed the following:

An emigrant was permitted to take 2,000 RM or less in currency out of the country
Any remaining assets would be transferred into blocked bank accounts

In addition, applicants could leave Germany only if they had valid travel arrangements and entrance visas for another country

To enter the United States, immigrants needed the following documentation for a US visa:

Applicants had to provide two copies of each of the following:

It is estimated that between 180,000 and 220,000 European refugees immigrated to the United States between 1933 and 1945. The United States accepted more refugees fleeing Nazi persecution than any other country in the world. Nevertheless, the vast majority of Europe’s Jews were murdered by Nazi Germany and its collaborators.