70th Anniversary: Anne Frank and the inhabitants of the Secret Annex deported to Auschwitz

Seventy years ago today, the 8 occupants of the Secret Annex are deported to the Auschwitz-Birkenau killing center in Poland. They were discovered and arrested in Amsterdam on August 4, 1944. After nearly a month of imprisonment at the Westerbork transit camp in the Netherlands, they were selected for deportation to Auschwitz.

The Frank family, the Van Pels family, and Fitz Pfeffer are among 1, 019 others selected for deportation. This is the last transport of prisoners from Westerbork to Auschwitz.

These events are of particular importance as it moves the Frank family out of hiding and the protection of their rescuers, into the maelstrom of the terrors of the Holocaust. It is also poignant in that in just a few months the liberation of the camps will begin. Neither Anne nor her sister will remain alive long enough to be freed," -- Sally N. Levine, Executive Director of Georgia Commission on the Holocaust.

A very long freight train is waiting for them. Around seventy prisoners are pushed into each car. Most of the prisoners have to stand. The Frank family manages to stay together.

In the wagon is a bucket that must serve as a toilet. Within a short time the stench is unbearable. The prisoners can barely breathe. One moment the train picks up speed and the next moment it slows down once again.

The train trip is three days long. The journey ends upon arrival at Auschwitz concentration camp in Poland. All the prisoners are forced to disembark on to the platform and “the selection” process begins – those of at least 14 years of age are “fit for work” while the elderly, children, women with children and those who appear ill are sent to the gas chambers. Of the 1,019 passengers on the transport with the Frank family, 549—including all children younger than 14—are sent directly to the gas chambers. 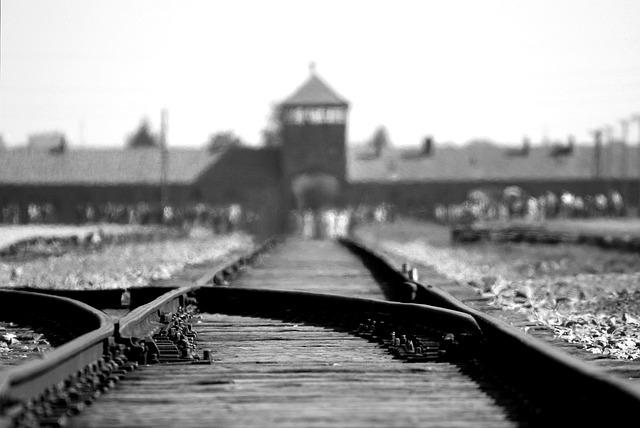 All the inhabitants of the Secret Annex survive selection. Otto is separated forever from his wife and daughters. Anne is soon made aware that many people were gassed upon arrival, and never learns that the entire group from the Secret Annex had survived this selection. She reasons that her father, in his mid-fifties and not particularly robust, had been killed immediately after they were separated.

A few weeks after arriving, Hermann van Pels injures his thumb on a work detail and is sent to the sick barracks. Soon after, during a sweep of the barracks for another selection, he is sent to the gas chamber. His selection is witnessed by his son, Peter, and Otto Frank. Learn about the fate of inhabitants of the Secret Annex.