With this year marking the 70th anniversary of the liberation of Nazi camps throughout Europe, the Georgia Commission on the Holocaust is commemorating not only the victims of the Holocaust but the survivors, soldiers, reporters, and others who bore witness to Nazi crimes.

Join us as we recognize and reflect on this period in history with a series of special programming and online content. 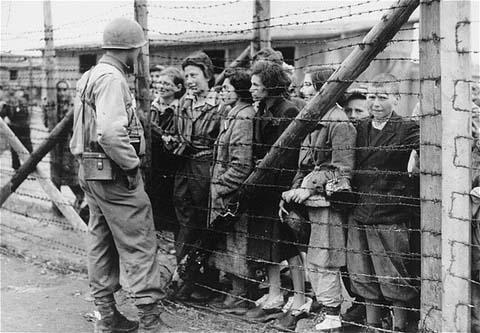 (Photo: An American soldier and liberated prisoners of the Mauthausen concentration camp. Austria, May 1945. — US Holocaust Memorial Museum)

Beginning in the summer of 1944 and early 1945, the Allied forces began to encounter camps established by the Nazis ranging in purpose from transit and internment to forced labor and death. Liberators were uninformed and unprepared for the horrific conditions with which they were confronted. The soldiers, many of whom were in their late teens or early twenties, took years to process what they had experienced. They were first-hand witnesses to evidence of the Nazis' crimes against humanity and the lengths to which the they went in carrying out the mission of their racial ideology. The liberators and witnesses to liberation carried not only the memories of what they experiences but the responsibility to bear witness.

"Georgia's Response to the Holocaust: Witnesses to Liberation" exhibition

This installment of the exhibition series "Georgia's Response to the Holocaust" profiles six Georgians who served the United States during World War II and witnessed the liberation of Nazi camps between January and May of 1945. Learn more.

All submissions were required to reflect the 2014 contest theme "Liberation: What Have We Learned 70 Years Later?" The winners will be recognized at the 2015 Days of Remembrance observance in the State Capitol on April 17. View the winning entries.

May 17 - Sunday Matinee: Documenting the Path of American Liberators

This short film from the United States Holocaust Memorial Museum shows unique footage of liberation and its immediate aftermath through the eyes of the American soldiers. It also touches on the rebuilding of survivors' lives in displaced persons' camps, through films of vocational training, religious gatherings, and children at play.

The United States Congress established the Days of Remembrance as our nation’s annual commemoration of the Holocaust and created the United States Holocaust Memorial Museum (USHMM) as a permanent living memorial to the victims. The 2015 State Official Days of Remembrance Observance will be held in the State Capitol on April 17. The 2015 theme is "Witness to Liberation: 70 Years Later".

In the winter and spring of 1945, Allied troops advanced across Europe toward Germany. They encountered Nazi concentration camps and liberated thousands of prisoners. In this short collection of testimonies from the United States Holocaust Memorial Museum, survivors and liberators recall that encounter.

In this film from the United States Holocaust Memorial Museum, historians and survivors discuss the significance of Auschwitz. It is estimated that at minimum 1.3 million people were deported to Auschwitz between 1940 and 1945; of these, at least 1.1 million were murdered. It was liberated by Soviet troops on January 27, 1945. Watch online.

In their advance towards Germany from the east, the Soviet Red Army was the first Allied force to encounter camps established by the Nazis. Beginning in July 1944, the camps they found had been demolished or dismantled by the SS in order to hide evidence of their crimes. However, when the Soviets reach Auschwitz on January 27, 1945, what they find is undeniable evidence of the lengths to which the Nazis' went in carrying out the mission of their racial ideology. Learn more.

After being deported from Auschwitz to the Bergen-Belsen concentration camp, Anne and Margot Frank suffer in the terrible conditions made worse by an influx of prisoners evacuated by the SS from camps in the east. US troops cross the Rhine River and German forces have no natural boundaries left to block the Allied forces as they advance from both the weast and east. Learn more.

American and British troops continue to advance through Germany. They too encounter camps established by the Nazis ranging in purpose from transit and internment to forced labor and death. Since many of the camps in the east had been evacuated by the SS, the American and British troops find thousands of corpses and survivors in extremely poor health at these camps. The soldiers present for the liberation, many of whom were in their late teens or early twenties, are uninformed and unprepared for the horrific conditions with which they are confronted. Learn more.

As Allied forces continue to advance through Germany, more Nazi camps are liberated. German forces, surrounded on all sides by American, British, and Soviet troops, finally surrender. Victory in Europe is declared. Otto Frank is finally healthy enough to leave Auschwitz, where he had been liberated in January, and he begins his journey back to Amsterdam alone. He is the sole survivor of the Secret Annex. Learn more.

2016 Days of Remembrance - "Mothers and Fathers: Stories of Love and Loss"