Yesterday, staff and volunteers of the Commission participated in an enrichment session addressing changes to the scholarship about Anne Frank. The program examined new research about the deaths of Anne and Margot Frank. 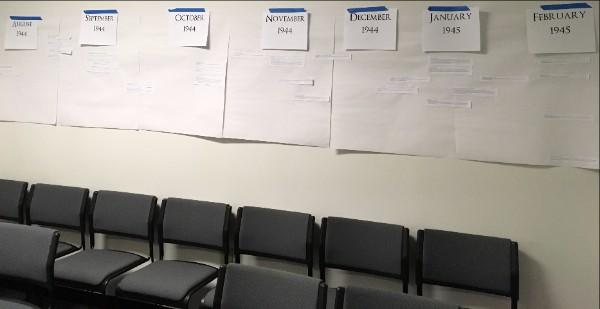 On March 31, 2015, the Anne Frank House in Amsterdam published new research clarifying the death dates of the Frank sisters at the Bergen-Belsen concentration camp.

The exact date of the sisters' deaths has never been known for sure. After the war, the Red Cross officially concluded that they died of typhus some time between March 1 and 31, 1945. The new research states that it is unlikely they were still alive in March; their deaths must have occurred in February.

The research utilized the archives of the Red Cross, the International Tracing Service in Bad Arolsen, and the Bergen-Belsen Memorial. It also included a combination of eyewitness testimonies from survivors, existing literature, and scientific statistics for the progression of the disease that killed the Frank sisters.

Typhus is fatal in 40-60% of cases around 12 days after the first symptoms appear. (Source: Anne Frank House.) Anne and Margot were showing symptoms in January 1945. The disease was rampant at the camp, spreading rapidly in the unsanitary conditions. Between July and December 1944, the number of prisoners at Bergen-Belsen doubled. By February 1945, that number increased by another 50%. With this massive influx of new prisoners, which included Anne and Margot who were transported from Auschwitz, conditions at the camp worsened considerably. Witnesses who knew the Frank sisters provided testimony confirming that they girls died within days of each other. Margot perished before her younger sister.

Anne and Margot were among tens of thousands of prisoners who died in the first few months of 1945 from typhus, tuberculosis, typhoid fever, and dysentery. The camp was liberated by British forces on April 15, 1945. More than 13,000 former prisoners died after liberation. They were too ill to recover and the British burned down the whole camp in order to prevent any further spread of disease.  (Source: USHMM)

To learn more about this topic, read the Anne Frank House's research article or the abbreviated sources report.