Mary Bos, a classmate and childhood friend of Anne Frank, visited the Anne Frank in the World exhibit in Sandy Springs with her family on Saturday, January 21, 2012.

Mary was born in Amsterdam and was a classmate of Anne Frank after her family moved from Frankfurt, Germany, in 1934. The Nazi Party had come to power in Germany in 1933. Anne attended a Montessori school while her sister, Margot, attended a public school.

On Anne's thirteenth birthday, June 12, 1942, she received a red-and-white checkered autograph book which she began using as a diary. In an entry made while in hiding, Anne wrote that she had had a dream in which she was looking at pictures drawn by her friend, Mary. Mary's daughter, Karen, reflects, "the funny thing is that my mom can't draw at all!"

Mary's father, Arie Bos, was "quite famous" in Holland as a world champion billiard player. He refused matches against any opponent supportive of the Nazis and even made statements against Hitler's military aggression.

This, of course, got him in trouble and he was put on a 'hit list' and received many threats," Karen explains.

It also turned out that the family's maid was a Nazi spy. Since Mary's mother, Katharine, was American, the family was able to secure visas allowing them to leave the Netherlands just one month before it was invaded by Nazi Germany in May of 1940. Mary remembers being told to keep her knowledge of her family's departure a secret. Her paternal grandmother died in a hospital after the staff refused treatment because of her relation to Arie. Mary's aunt died at one of the Nazi's many concentration camps. 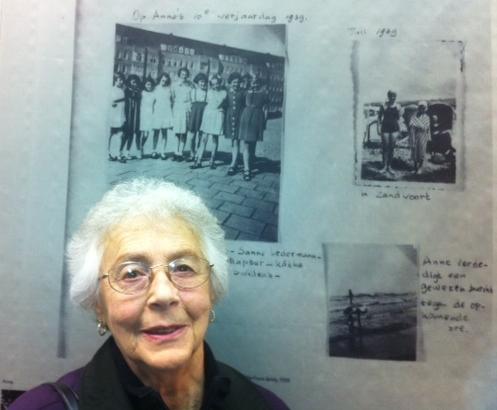 Mary did not realize Anne's fate until she read her diary after it was first published in 1947. She also visited Anne's father, Otto Frank, after the war. Mary has "vague memories of Anne," including Anne's tenth birthday party of which she had been a guest. The Bos family donated some items to the Anne Frank House in Amsterdam, including a copy of the picture taken at that party and an autograph book of Mary's in which Anne had signed "with love" after her message: "Think of your school friends in the past. When you think of that, and these last years, then think Mary also of me."

Of course, when [my mother] knew Anne, she was just an ordinary girl," Karen states.

Mary and her husband, Bob Schneider, visited the Anne Frank House in Amsterdam as honored guests for the museum's 50th anniversary. The trip included a visit to the Montessori school and dinner with Otto Frank's step-daughter, Eva Schloss.

Mary lives with her husband in Hendersonville, North Carolina. The couple often visits Atlanta. The picture of Mary and Anne at her tenth birthday can be seen on panel 41 of the Anne Frank in the World exhibit.