On June 12, 1939, nine girls lined up with their arms around each other and posed for a photo in front of the apartments at Merwedeplein in Amsterdam. It was their friend's 10th birthday. Her father, Otto, snapped the photo and later gave copies to each girl in the picture. It was just three months before the start of World War II but the Holocaust had already begun in Europe.

Mary (Bos) Schneider is one of the nine girls in the photo (third from right) and even though over seventy years have passed, she still remembers that day, her friends, the games they used to play, and her home in Amsterdam.

Mary visited the Anne Frank in the World: 1929-1945 exhibit on January 20, 2015. It was her second time touring the panels, one of which includes a copy of that photo. She shared her memories of Anne and talked about when the photo was taken.

Mary was born in Amsterdam and was a classmate of Anne after the Franks moved from Frankfurt, Germany. Mary's father, Arie Bos, was "quite famous" in Holland as a world champion billiard player. He refused matches against any opponent supportive of the Nazis and even made statements against Hitler's military aggression. Since Mary's mother, Katharine, was American, the family was able to secure visas allowing them to leave the Netherlands just one month before it was invaded by Nazi Germany in May of 1940.

Mary did not realize Anne's fate until she read her diary after it was first published in the United States in 1952.  Mary’s mother visited Otto at 263 Prisengracht in Amsterdam where the Franks hid from July 1942 until their arrest in August 1944. The Anne Frank House, as it is now known, was converted into a museum in 1960. 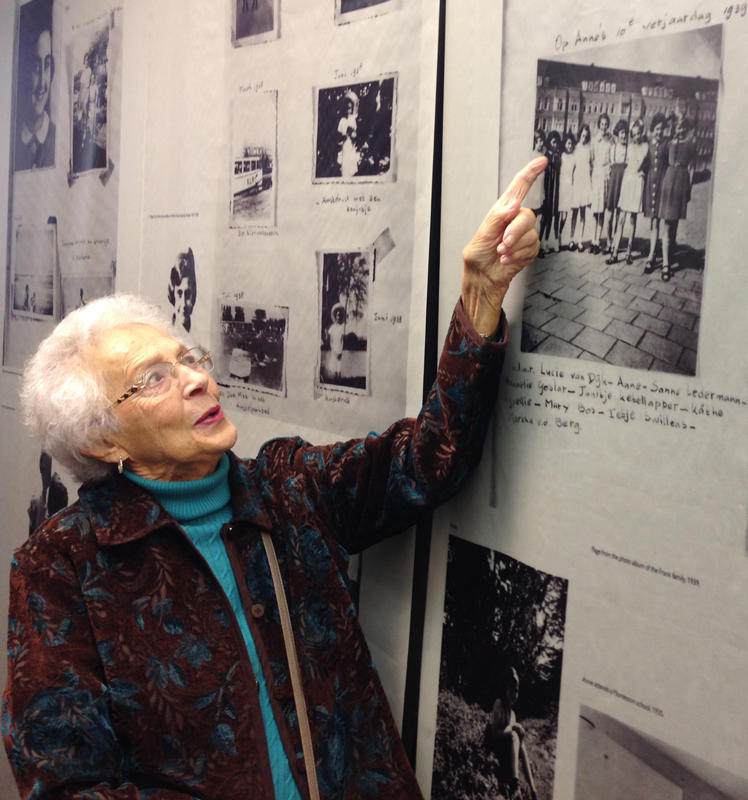 Otto was at the museum that day and my mother saw him and gave him this picture,” Mary explained, pointing to each girl in the photo and identifying them by name.

The picture of Mary and Anne at her tenth birthday can be seen on panel 41 of the exhibit. Admission is free.

Mary first visited the exhibit on January 21, 2012. She lit one of six memorial candles at the 2012 Days of Remembrance ceremony at the Georgia State Capitol in commemoration of the victims of the Holocaust.